The Great Fourth Makes You Contemplate 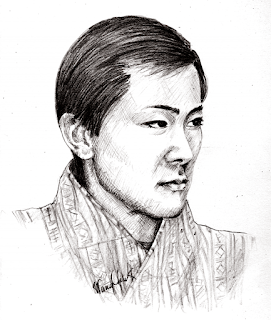 The Great Fourth. A lion among men.
An unerring shepherd. A protective vanguard.
Not that he’d tell you. But deeds do.
As does the refining hourglass of timely hindsight.
Together they shape up a figure seldom seen.
Sculpted in flesh and blood.
All the more alluring in a reality increasingly dominated by the selfish variety.

Grounded as he is exalted. Wise as he is pragmatic. Humble as he is daring. The Great Fourth is alive.
What a precious opportunity it is to celebrate such a life.

But I must confess. Paying tribute to such a sublime being is a futile affair.
Futile in terms of material one can peruse and nitpick.
And then write an homage that drives up the mountains of pros and goes down the valleys of cons. There’s no such terrain.
The landscape of his persona is constant.
The horizon of his being, stable.
Yet the views, spectacular.

This man does not claim credit. Does not hanker after bouquets. Does not involve himself in pettiness. Does not get lost up in the summits. In all dualistic callings, equanimity is his measure.
Contentment, his treasure.

In terms of writing, it’s a dead-end. There’s hardly anything to play with. There are no toys.
Not even discarded strays. No winding roads. Sudden U-turns. You park in a plot. Lost in awe.
Recalling a man who bewilders your habitual firmament.
Lost in open-eyed marvel. Nothing is wasted.
Everything has a purpose and a meaning.
It’s more than mere adoration. Its respect.
Born of graft. Grit and sacrifice.

What makes a man such a king and such a king such a man? Another lost cause.
There’s nothing to cherry pick. There’s no bone of contention.
As a writer one looks towards ambiguity.
So far I’m failing and falling. Miserably.

I’d like to draw a thesis. Sketch an anti-thesis. And find relief in some synthesis. A fool’s play.
Bereft of the juice, the fruit is rather dull. How does one concoct a juicy cocktail with such a fruit? Perhaps this is not an apt analogy. Or I’m barking up the wrong tree.
How do you explain the Ground, Fruit and Path of a man who’s still walking down those woods?
How does one implant such a seed in one’s own garden? How do you grow it? Take care of it.
Nurture it. Disperse it. Give it back? Multiplying it still?

I guess you try. Imitate at first. Gradually emulate. Keep practicing. Diligently.
The world is where it’s at because there’s overwhelming information. Mostly narcissistic.
Men in power in the news.
Men after power in the news. Deliberate. Subtle. Nonetheless manipulated.
Hungering over power. Unwilling to exit gracefully.
They hang onto power. Often with tragic consequences, and comical reviews.


The hard work within. The distraction minimal.

The lust for glory stretches and crosses all boundaries. We live in an age of instant celebrity.
Blind worship. Everyone wants to be famous. The path to fame does not matter. Fame does.
Littered with infamy.

The Great Fourth eludes such fame. He transcends gossip. He escapes labels.
He rises above the ordinary yet lives grounded in simplicity. He is a mystery.
We wanna know the man behind the majestic phenomena. There’s no such distinction.
There’s only his touching phenomenon.
Spontaneous. Expansive. Generous.
What you see is what you get. What you get is what you see.

How do you paint such a figure without any additional color?
I guess the answer is obvious. You don’t.
The rainbow does not beg for a hue. Sunsets and sunrises paint their own brilliance.
Stars in the sky don’t cry over falling comets. Broken. Dead. Shattered.

The reason I’d wanted to shed something additional was simple.
I was tired of the usual sobriquets with which accolades are worded.
Dulled with boredom reading trite tributes laden with bombastic praise.
I wanted to pen something unique. With grace. Another futile pursuit.
I’m no wiser now than when I began pondering my strategy in writing a paean laden with a revealing élan.
I realize the sunlight doesn’t require my flashlight. Neither does the moon an extra coat of shine. Dazzling and luminous by nature, they shine as they are.
Natural. Luminous. Illuminating environs.

Then I wanted to say the same things but with a coerced context.
A daunting task doomed to fail, as I found out.

The background cannot be changed.
It seems that his life, country and people are inexorably drawn in one common stroke. One knot. Almost predestined. And woven as such.
I’d like to imagine that somewhere in there there’s a thread that’s me. Insignificant. Dispensable. Pathetic. Yet somehow conjoined to that fortunate web of the Great Fourth.
That changes everything. It changes whatever makes me whoever I am.
And I’m a subject of the Great Fourth.
A denizen of a land blessed by his birth.
A citizen of a kingdom blessed by his kingship.
One among his many grateful subjects.
A beneficiary of the objectives he set out and achieved.
And now I’m a man wondering how best to pay a telling tribute. Showing appreciation.
Gratitude. Loyalty. Love.

So much to ponder.

Now what would a man like that wish for on a day that is truly his?
Presuming he’s gonna blow out candles on a cake? Boldly making presumptions in a worldly sense, knowing worldly assumptions are like mere candles in the wind.
Unless it’s in the transcendental sense.
And maybe that’s how we should continue our inner acknowledgements once the outer celebrations are done and dusted.
Because it’s precisely those intangible qualities that we must all aspire to, and keep celebrating.

In the most substantial sense.
Contemplatively. Altruistically. Personally.